And Turn Tartan! Outside

Stepping outside of all those info sessions into the pleasant 5°C/41°F weather, the first thing you notice is that CMU keeps its buildings toasty. It’s T-shirt weather inside the classrooms and halls (although, not shorts weather). Speaking of which, I was a little disappointed that I didn’t get the true Pittsburgh weather experience because it was down to -14°C/7°F just the week before with a magnificent snow-storm, but I did get to see… snow! 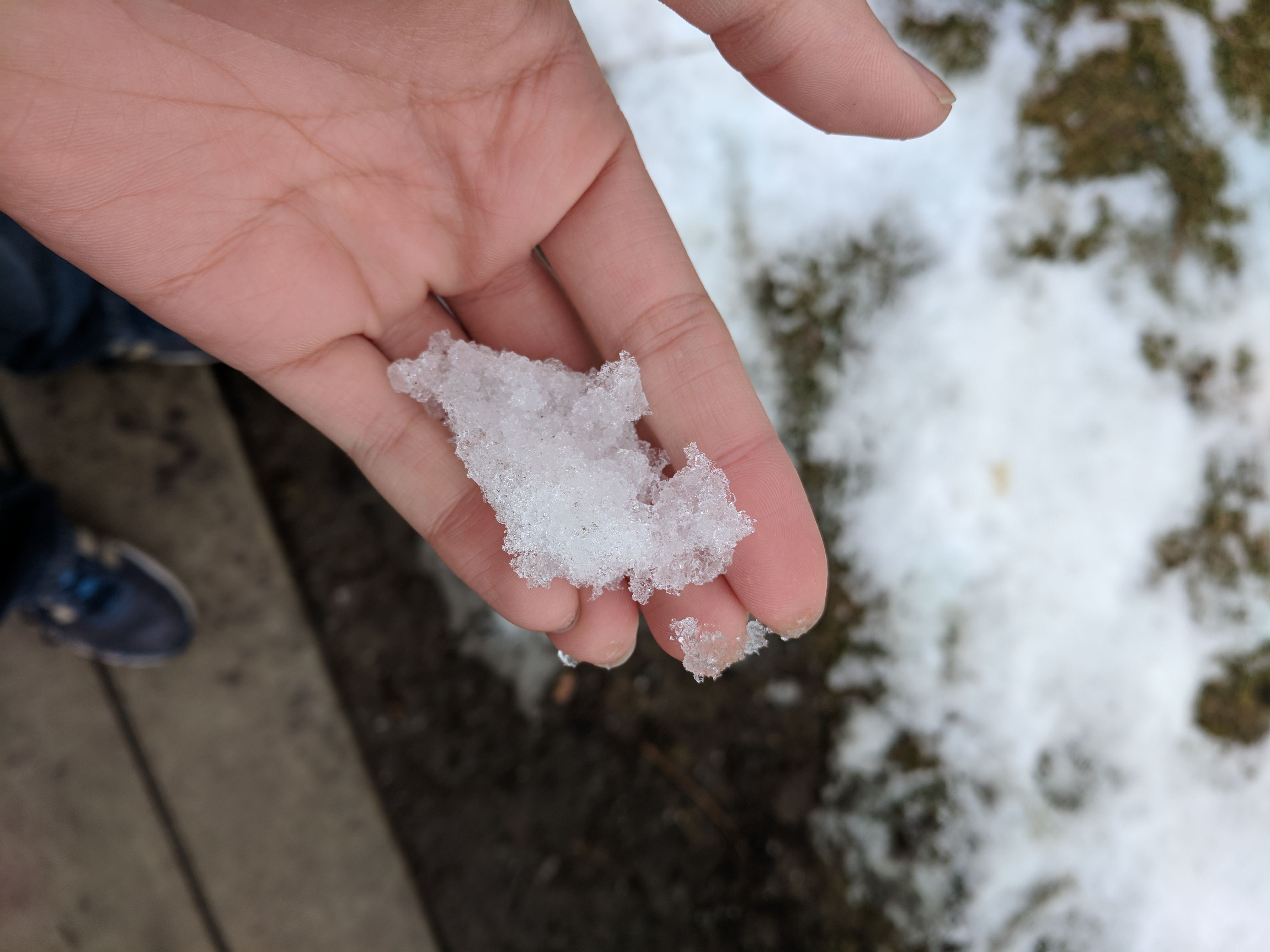 This is, in fact, my first conscious memory of being in snow, because the last and only other time was when I was four or something. The snow at CMU was actually a little different from what I expected: it was crunchy, like crushed ice, and not soft or mushy. Snow veterans told me that the type and age of the snow have great influence on the texture and that I will get to know it better if I do end up going to college in a snow-ful place. And in my opinion, the snow-ful place that is CMU takes snow in stride very well: 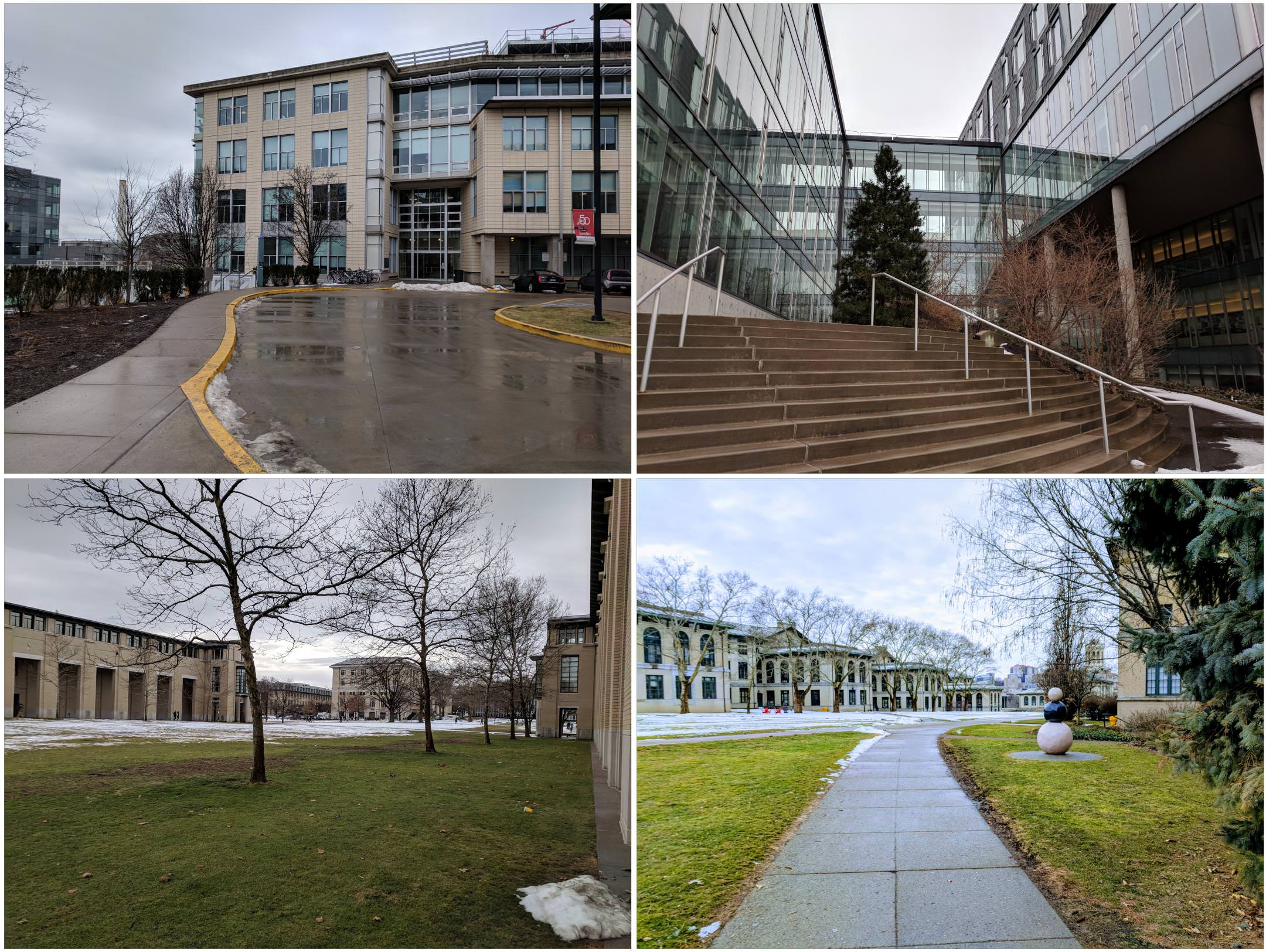 The pictures give a good idea of the general look of the place. Frankly, the buildings aren’t too attractive, but aren’t bad-looking either; most of them are yellow brick with dark brown accents, but some, like the Hunt library and the Gates building, have a more modern gray-blue-black aluminum-glass kind of exterior, which fits well in contrast with the other buildings. A non-negligible portion of the buildings is actually underground and many buildings have underground connections with each other so you can avoid the cold outside. Although that is pretty cool, it means there are weird unaesthetic blobs of buildings surfacing from underground here and there on campus. Campus layout is a tad confusing but according to the student hosting me, the residential halls are conveniently located within five minutes of classes and food.

Speaking of food, CMU doesn’t have centralized dining. Rather, a large variety of eateries from Pittsburgh have outlets on campus (which accept a CMU meal card), so there’s a lot of competitive choices—from all-vegan to authentic Mexican to personalized pizzas to sushi, not to mention the cafes (fueling study with caffeine and snacks, no doubt) in basically every building—and a lot of flexibility for when you want to eat. The urban campus (which nonetheless has clear boundaries between campus and city) is also a 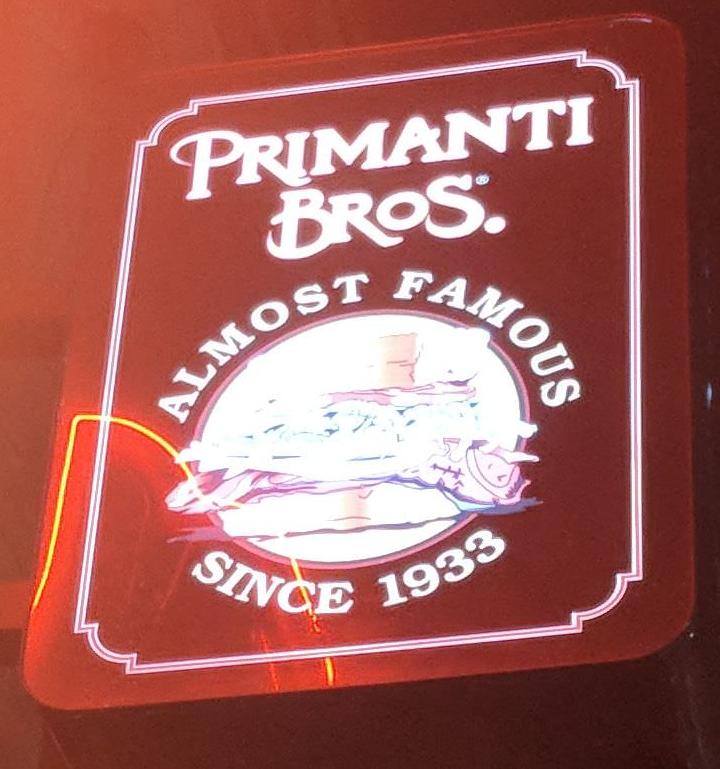 fifteen-minute walk away from the downtown area and two well-off neighborhoods which contain, along with yet more places to eat from the classy to the finger-licks, museums, libraries, and two other universities. (Fun fact: The ‘Duquesne’ in Duquesne University is pronounced /djukeɪn/ and not, as I formerly believed, /djukɛsnɪ/.) 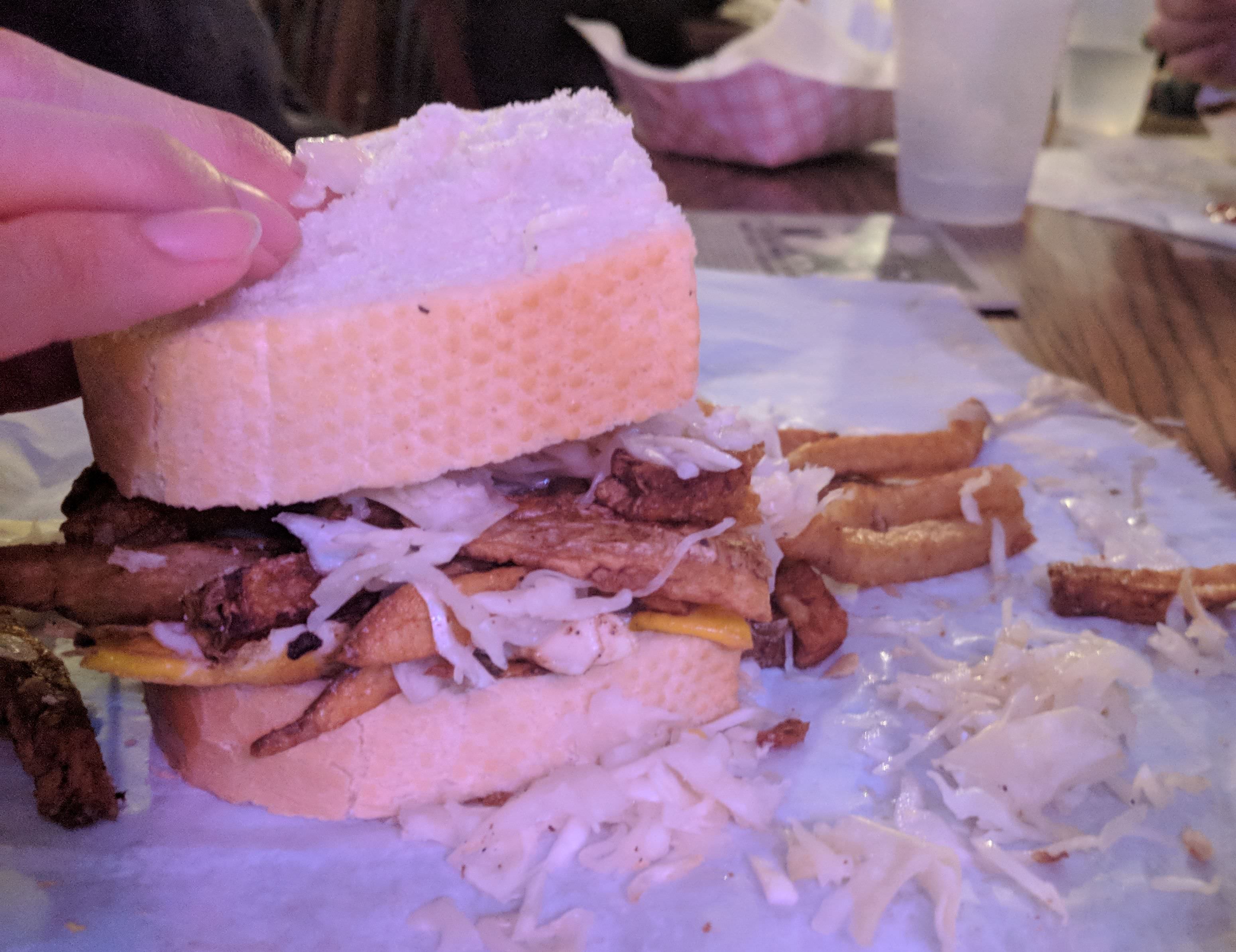 It was to the downtown we went for dinner, to the “almost famous” original Pittsburgh-native “Primanti Brothers” sandwich bar. Their specialty is sandwiches made with fresh Italian bread, with french-fry-like fried potatoes inside them, making my double egg and cheese sandwich (and the sandwiches of everyone else) too big to neatly fit into my mouth. It’s meant to be a messy meal. Only half of it is pictured (I was really hungry so I ate half of it and then had to take a break because it was so big).

Back to campus. I was hosted in the Hamerschlag residential hall (what a brilliant name! someone noted that it was vaguely reminiscent of ‘sledgehammer’) and like the other buildings, and I expect, the other dorms, it was nice and warm, and had the usual lounge, kitchenette, etc. The rooms were large doubles and a little awkwardly-shaped, and everything was carpeted, adding comfort to our sleeping-bag-on-the-ground night.

More area in the Hunt library is taken by study spaces than book stacks. Our tour guide told us that these study spaces are equipped with whiteboards aplenty and are frequent locations of research group meetings and study “parties” before tests. Coffee and a quick bite are close at hand in the basement.

The Gates building has “open learning spaces” which are basically rooms with a lot of workstations in the center and a lot of floor-to-ceiling whiteboards around them. Whether you’re meeting with a group of other students, doing your own lab work, or listening to/looking at a professor, much of the activity happens in these open spaces. Apart from that, the building features a cool central helix staircase with classrooms inside the helix, and a bridge dedicated to Randy Pausch.

Two new buildings are planned for the next couple of years: the Tepper Quad, housing more of the business and management programs, and a TCS building, no doubt a promising possibility for CS internships.

Because internships seem to be a rather big deal particularly with CS students at CMU. I attended a student panel about research and internships and was surprised to find that 85% of the discussion was about internships, even though one of the students on the panel had gone to France for a semester on a research project. The panel had two CS majors, one electrical/computer engineering major, one data science or information systems major, and two chemical engineering majors, all of whom spoke at length about internships and how to get them.

Their advice boiled down to this. You need to go to career fairs in formal attire and reach out to recruiters right from your first year when you have no chance of getting an internship just so that your face and resume gets out there. You need to do all you can to build a solid resume and a solid network, with alumni meets (because alumni often have connections), projects, marketable skills, maybe even starting in high school, showing your leadership and your superior abilities. If you’re coming into CMU with considerable programming experience from high school, great! With the right marketing you may even land a coveted first-year internship. In any case you need to work on your “elevator pitch” (i.e. what you’d say if you found yourself sharing a half-minute elevator ride with a recruiter (for some reason this makes me think very strongly of this peculiar individual)) and talk to your advisor about your career plans and prospects. And yes, we have done this, which gave us [enjoyable] internships at Boeing (a bunch of these apparently, for data science, decision theory, computer science, and engineering), Apple, Google, and tech companies in Pittsburgh.

Even though I’m not looking to do computer science at CMU, this struck me as remarkably… toxic. Maybe it was just an unfortunate panel selection, or maybe it’s just me feeling that way and others enjoy the seriousness and career-facing perspective, but it didn’t seem right to me at all. But on the positive side, as mentioned by some of the students on the panel, this means research opportunities are much more plentiful and less frequently taken. Students need only ask a professor to start being involved in research, if not with the professor then with other faculty that the professor would suggest based on what you tell them of your interests. But the CS faculty and education itself at CMU is among the best in the world. So if you’re content with finding a research niche and not jumping into the internship pool with your great education, I believe it wouldn’t be an issue.

What to say? With that bit about the CS environment above I feel this post is going to suffer from the peak-end effect, hehe, hopefully the ‘peak’ lies elsewhere and mentioning the bias works against it and I’m prolonging the end enough so that my next few words count as much as they should.

I really liked CMU. The information sessions were informative, the handful of students I personally interacted with were friendly, the atmosphere was one of study but not of stress, the food was nice, the weather was actually not bad. I enjoyed my twenty-eight hours at CMU and if that’s any indicator then I guess I’d be happy to spend four years there too. If I get in.