It’s been a long time since I’ve done any serious biking (cycling). The last few reasonable times I remember are probably somewhere in 9th through 11th grades. At one point, before the 10th grade fever hitting my school year, I and my dad biked along with a large group along the Western coastline of Maharashtra, on a stretch of about 200 km. The route was scenic and at times unbelievably beautiful. Visiting Konkan on any pretext always turns out to be a pleasant trip anyway, but additionally biking on the narrow village streets and stopping in a bunch of places on the way to have delicious homely food from several different little towns was a big added bonus. The other few times were probably just routine rides into the neighborhood, most of them at the nice and green University of Pune campus, and some with some of the local cyclists groups in town.

The University of Pune campus happens to be right beside my home, and is connected to the street I live on via a bike- and pedestrian-friendly stretch of a handful of kilometers. Ever since my childhood, my mom and dad have been fond of going on walks and (less often) bike rides into the campus early in the morning. As I grew older and learned to bike, my dad would bring me, or at least try his best to do so, to go on a ride into the campus every morning. We would leave home, ride south and carry our bikes in our hands through a pedestrian-only gateway. We would then take the bike-friendly path along the foothills of the northernmost parts of Pune’s central hill system. Back then, riding on a rough patch behind the University main building, or on a short-cut walkway between a main road and a canteen, felt like the ultimate off-roading. We used to frequently tag along with a local cyclist group too. The ‘Pune Cycle Pratishthan’, or so they called themselves, would ride from Law College, down Senapati Bapat road, merge onto the University road, and make a loop going all around on the outside of the campus, and would then ride into the University to the central canteen and eat the same old breakfast every morning: chai and idli-vada-sambar. 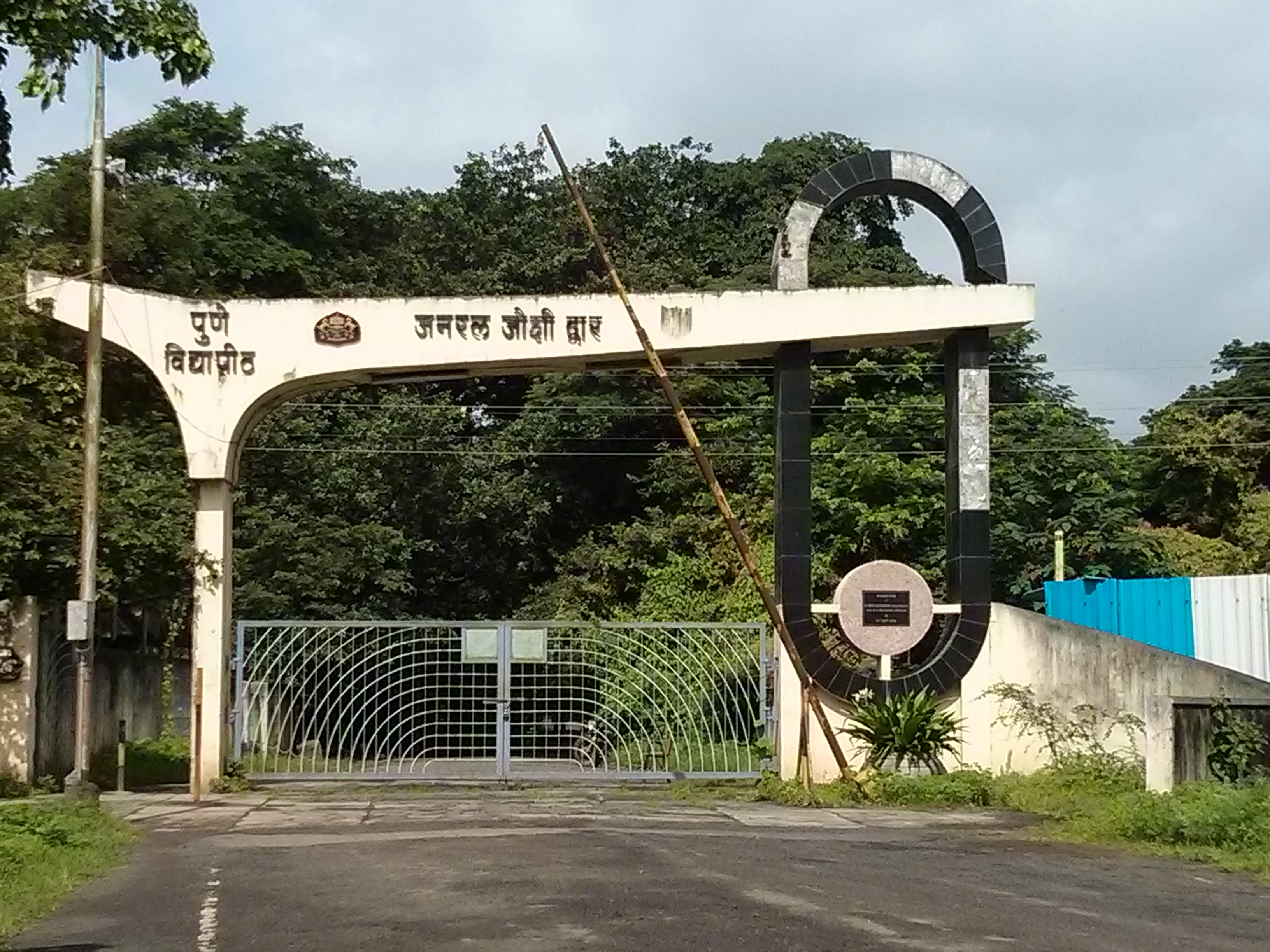 Soon enough, however, I somehow stopped, going out for rides only occasionally, or only riding to and from football practice. 12th grade happened. College happened. I missed biking. The summer after freshman year, I had to go to California for a conference, and visited Shardul since he lived so close-by to the conference venue. One evening, we went for a bike ride to a trail and a park system near Fremont. I was biking after a long time, and it felt like the best thing ever, and that I needed to get back into it soon. 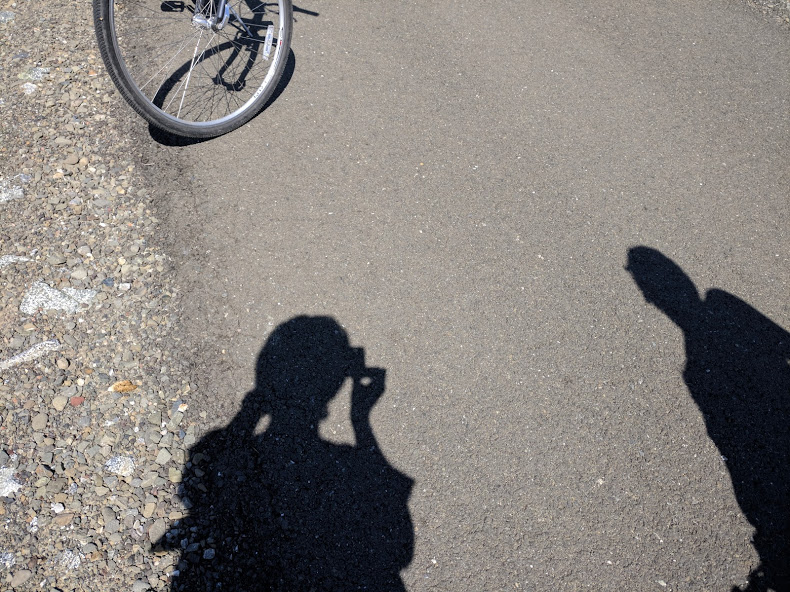 Fast forward to this (academic) year, I had to return to campus a bit early. Okay, not just a bit, but two entire weeks early to be trained as a Resident Assistant. Earlier that year, i.e., all throughout freshman year, I had had high hopes about the campus-wide bike program. The ‘yellow bikes’ were fun to use, had a leisurely commuter/tourist posture, and were perfect to ride around campus and from dorms to classes and back. Soon enough, however, on weekend-nights, more and more of them started to end up at the bottom of Westhampton lake (or so it was rumored, and occasionally revealed on videotape), or just simply vandalized. 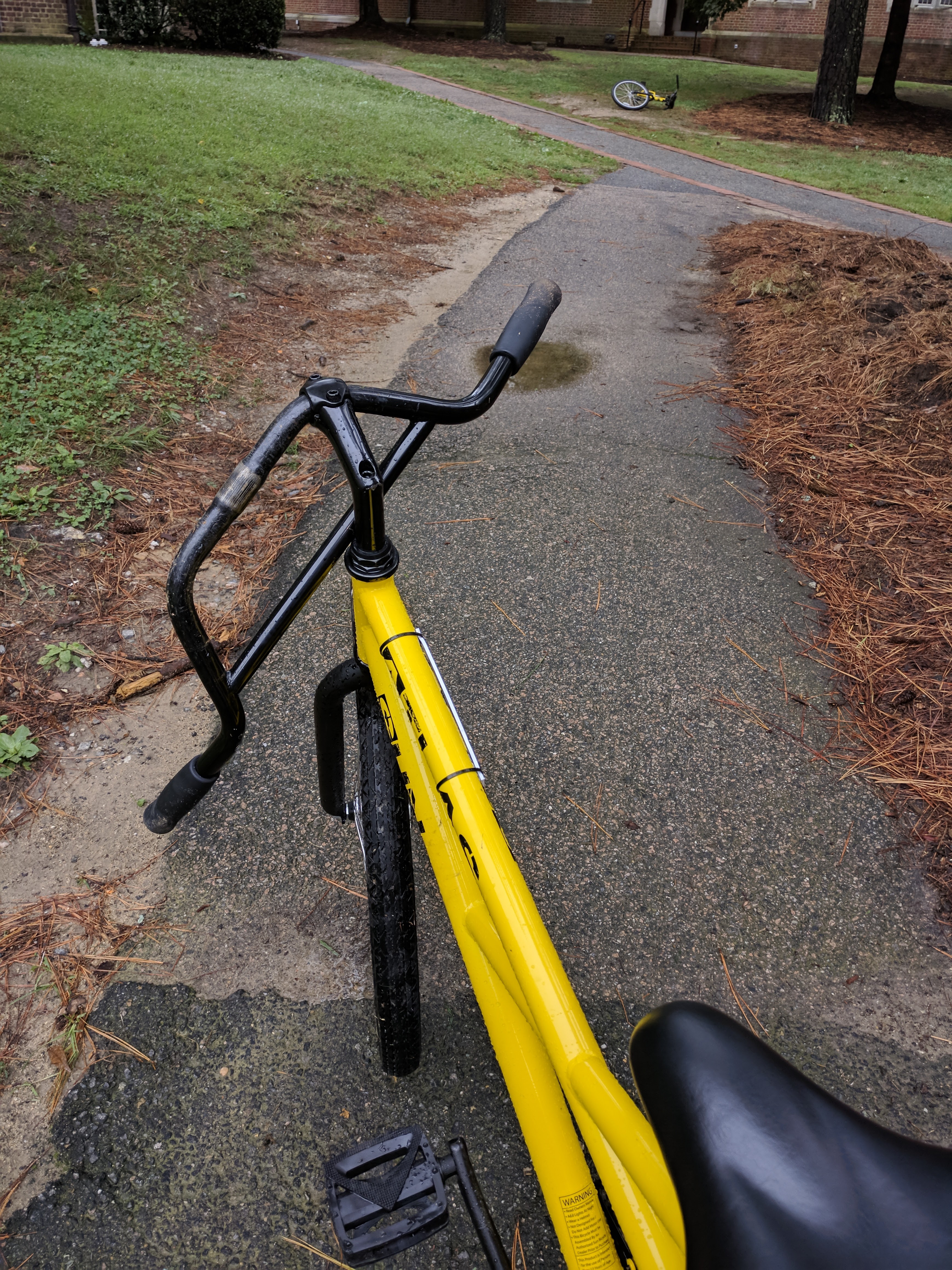 Additionally, one isn’t allowed to ride the yellow bikes off-campus (but presumably that must have been how a lot of the rest of the bikes gradually disappeared). This was not going to be a long-term option. I decided I would just carry my bike from home, as an additional piece of luggage. Surprisingly, many airlines flying from the subcontinent to the US allow the carriage of sporting equipment at no additional charge, which meant I could easily just bring my existing bike to campus. Some packing complications and work start-date conflicts later I realized that I would have no reasonable way to carry the bike between Washington, D.C., and campus since my friend who I was originally going to hitch a ride with, had to leave a day earlier.

Anyway, I scrapped that plan and came to campus with just as many bikes on me as I had left campus with. After a day of the same-old training sessions, and with not much to do afterwards, I decided to go into town one evening and take a look around the first reasonable sounding used-bikes shop that popped up in my search results: ‘Rag and Bones Bicycle Cooperative’. To make sure they were still open, I called their number listed on Google.

Person on the phone: hi, this is McDonald’s, how may I help you?

Me: uhhh.. (maybe I entered the number wrong; hangs up).

M: hi, uhh is this Rag and Bones? I got your number off of Google

P: yes, this is Rag and Bones

M: (very confused and unable to figure out the joke) and this isn’t McDonald’s by any chance?

P: hehe, I was just messing with you

Hm, interesting. The place was open, so I went to check it out with a friend. As I later found out, it wasn’t a shop at all, but rather a community-run cooperative where anyone could bring in their bike and repair it themselves. The ‘shop’ component of it was to sell old, donated bikes, and was mainly run by volunteers, some of whom also had their own bike shops. 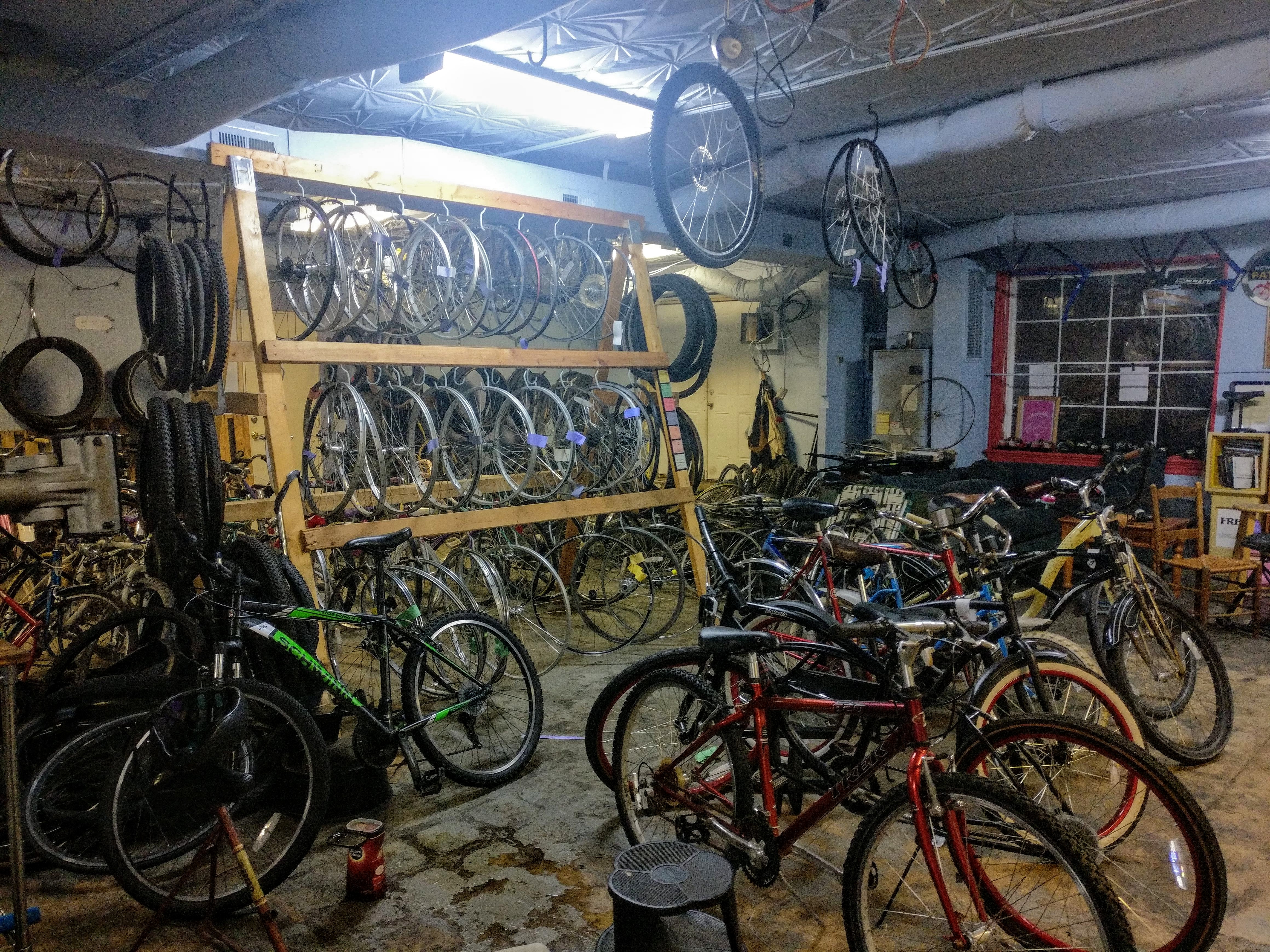 I looked around, and saw some bikes I thought would be appropriate, and with the help of the person there, was able to narrow it down to one bike—it was visibly old, and had seen some harsh weather and terrain. But it had to have been beautiful in its prime. It was not in rideable condition at that time, but it wasn’t anything that some touching up wouldn’t fix. Most importantly, it was going to fit inside my paycheck and then leave me with some more! After some basic touching up, I took it for a ride along the block and loved how it felt. It was so good to be back on a bike after so long. I brought it back to the store and said I would come back to pick it up when it was done being patched up at least to the point where it wasn’t dangerous to ride it anymore. 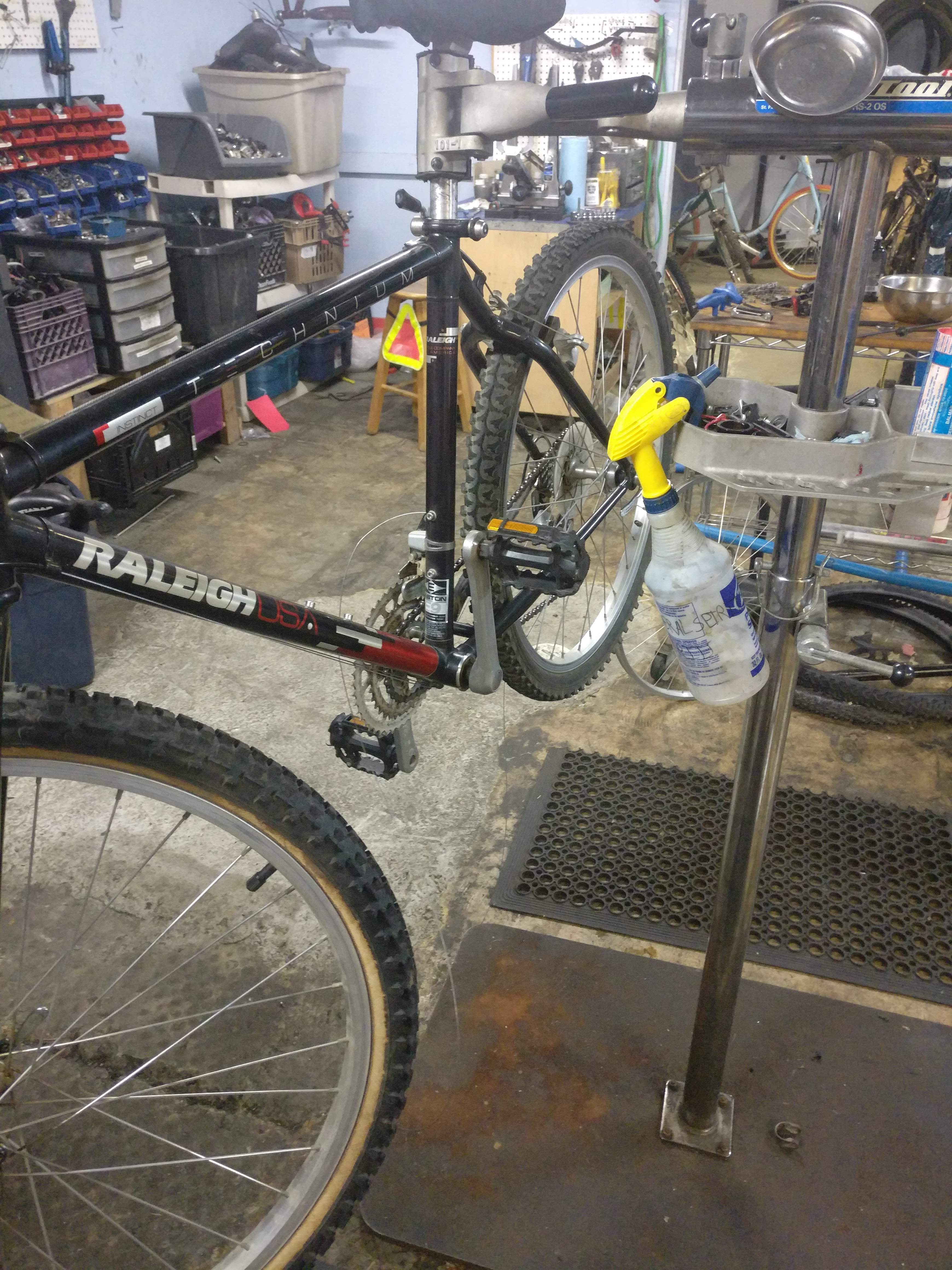 I returned a week later, strategically with a different friend who owned a truck, to pick the bike up. I encountered a different person this time, but thankfully the bike was still there, and had a tag attached to it saying it was kept on hold for me, and had the agreed-upon price clearly marked. Sigh.

I can’t say I got back to riding as much as I used to back home during the year: most of it was riding to and from classes and events; rush-pedaling to D-Hall (the dining hall) at 19.55 before it closed at 20.00, or to RA duty so that I wouldn’t be late. During about half of the academic year, the weather was prohibitive too: with cold weather starting late October, and being mostly rained or snowed in on a lot of days up until February, there weren’t too many days I could just go out for a ride. Of course, there was the usual time crunch one has during the semester. Additionally, riding on the actual road right outside campus meant I needed to know traffic laws, and understand road conventions. I had no idea about any of these other than what I could gather riding shotgun in my friends’ vehicles. 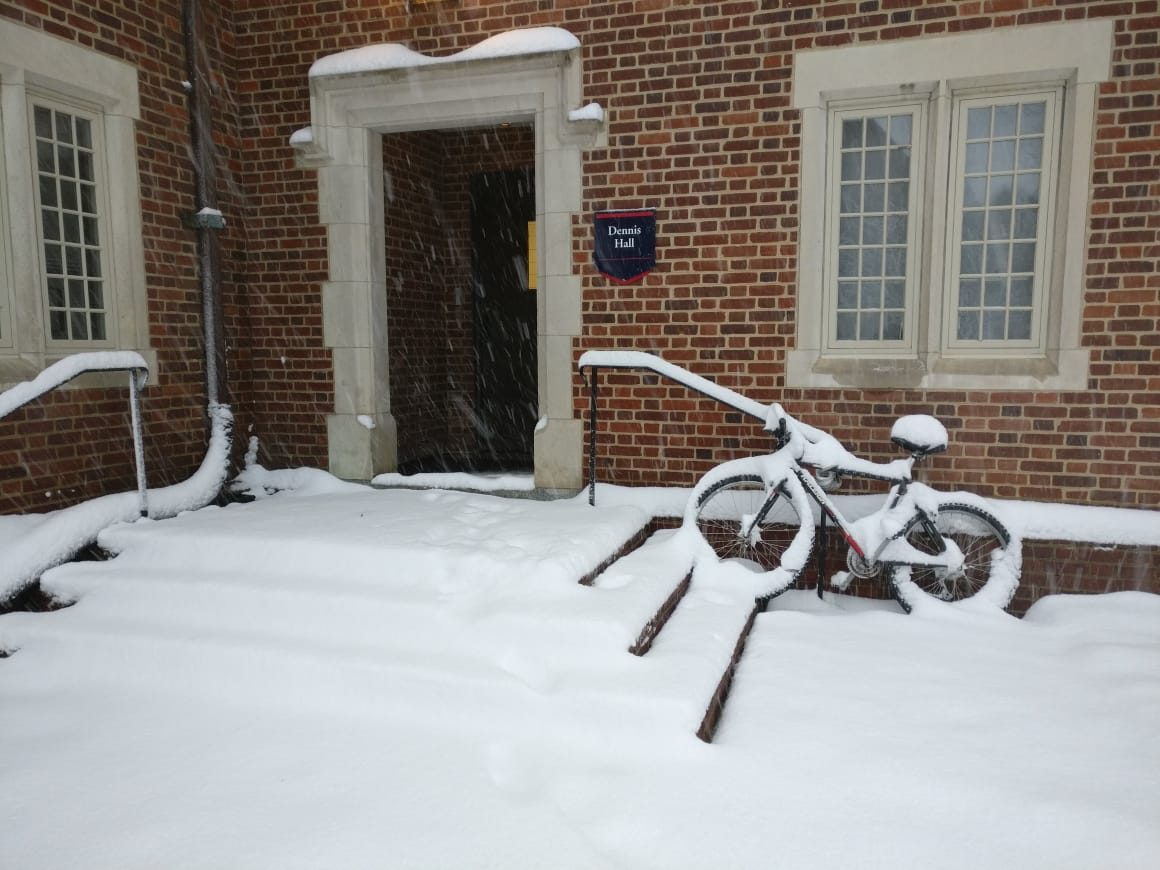 During the spring semester, I and some of my friends were in a computer architecture class. The course, and particularly, our professor, were both reputed to be notoriously hard. One day, we were working on a programming assignment for that class and it wouldn’t run no matter what we did. We all felt like we needed a break from code. At that point, I just felt like going off campus for a bit, so I rode off, taking the nearest exit onto a main road, with no navigation. I wandered off onto nearby calm and woody streets with lots of pretty houses, and then merged back onto River road, which was a road I recognized would lead me back to campus. I knew I had to take a left turn at some point in order to make it back, but I had no idea when that left turn would arrive, as it was well hidden behind the dense trees on either side of the road. At one point, I thought it was around the corner, so I indicated to the vehicles behind me that I was taking the lane, on that single-lane heavy-traffic road. Oops, false alarm! The turn wasn’t where I expected it to be. Oh, but maybe it was around the next upcoming corner, so I shouldn’t give up the lane just yet. A good three minutes of riding with having taken the lane, and a decently long patch of presumably frustrated cars riding behind me, looking like they could honk any time, I finally found the turn, and freed up the lane.

That day was just the push I needed, and I realized how bike-friendly the traffic laws actually were. I gradually stepped up going out biking to more and more places nearby campus thereafter, and learned the traffic laws better.

Fast forward to a few months later, I’m back to biking like I used to at one point. Turns out, Richmond is a bike-friendly city, and I’ve been trying to re-explore it more again, this time on a set of wheels and a saddle, now that summer is here. This Tuesday the City of Richmond is urging everyone to use anything but their own cars to commute to work. I plan to go into downtown that morning to see what that looks like as opposed to any regular day, and then ride back to campus and go to work myself.