A Year in Review

Hello! I write this post after a long period of inactivity on the blog. This is a post with my thoughts on my first year in college: partly because freshman year had a lot of things to talk about; partly because I couldn’t think of much else. I am currently on a flight from Chicago to San Francisco, on my way to the Google Code-In winners’ trip as a mentor for the Terasology Foundation. I figured this would be a great time to write this up: better now than later (which, probably, might have meant never)! So here goes:

As is the case with most college students, my year began with first-year orientation: a week of information sessions, socials, and events meant to welcome incoming students to the University and to help them (well, us) meet other first-years. My feelings about orientation are mixed. On one hand, it does give us time to get familiar with the campus, and some of the events were actually fun. On the other hand, the effectiveness of a lot of the mandatory information sessions was questionable, and to be frank many of them were quite boring. As for making friends, while I did end up meeting and talking to quite a few people during orientation, I didn’t end up becoming too close to any of them. I suppose I did technically meet people on my floor who I became good friends with over the year during orientation, but we met because we were hanging out in our floor lounge, which would have happened regardless of orientation. Most of my friends agree with me on this, and “the awkward feeling when someone you met at orientation says hi and you don’t know their name” has become an occasional joke in our circle. Maybe this is just a University of Rochester thing. Either way, it’s just a week, and it does have its fun moments, so it wasn’t a bad way to kick off the year (and my college career).

Classes started soon after orientation. For our first semester we were only allowed to take four full courses (usually 4 credit hours) plus three additional credit hours for smaller courses and activities. I took a music theory class, the required introductory algorithms/data structures course, a required writing seminar, and an honors calculus course. For my additional credit hours I enrolled in piano lessons at the Eastman School of Music (which is part of the UofR) and a 1-credit course which can be used by honors calculus students to take care of the “discrete math” requirement for the computer science major.

The music theory and data structures courses were fairly standard, with traditional lectures, homeworks, and labs. At the University of Rochester, each student is required to take a first-year writing seminar. The aim of writing seminars is to introduce students to academic writing. Each section has 10-12 students and a topic which students discuss and write about throughout the semester. The course usually ends in an 8-10 page paper relating to the section topic. My section was titled “Philosophy through Science Fiction”, and I genuinely enjoyed the course. The instructor was a PhD student in the Philosophy department, and was as such fantastic at conducting discussions and drawing philosophical arguments from students. I wrote a final paper on the ethics of government cyber-surveillance, and was quite happy with the result.

Honors Calculus 1 was the course that surprised (and affected) me the most. The first lecture began with our professor, Steve Gonek, giving us the kind of opening speech one would only expect at a naval training base. “It’s marine bootcamp for the mind”, he said, as he took a ‘before’ picture of the class. After a solid 15 minute speech, we began the academic material for the course. At this point I (and most others in the class) was expecting to dive straight into some really hard calculus with derivatives and integrals flying all over. To our surprise, we ended up talking about the basic definition of a field and proving results such as “In a field, 0 is unique”. Over the semester, and over the spring semester in calc 2, we went over rigorous definitions and proofs to build calculus from the ground up. This, we learned from our TAs is what a “proof-based calculus” course is like at most schools: a tamer version of an introductory real analysis course. The honors calculus series, and Prof. Gonek, are a big reason why I am now planning on doing a math major and getting involved in math research.

In the spring I took five courses: honors calculus 2, formal systems in computation, computer organization, introductory linguistics, and music theory 2. Academics were more or less the same as the first semester, so I won’t talk about them in much detail. Here’s a sentence or two about each:

I started contacting professors about getting involved in research at the beginning of the spring semester. I soon got in contact with Len Schubert and became part of his research group which focuses on using logical systems for natural language understanding. I spent most of the first half of the semester gaining background knowledge, after which I started writing code for the ULF project. Towards the end of the semester I also got in touch with Alex Iosevich from the math department, who I am currently doing independent work with. I was pleasantly surprised about how easy it is to approach professors at the UofR. The departments (at least math and computer science) are small enough that even if a professor doesn’t reply to emails (which happens more often than not), one can simply drop by their offices to chat. This felt a little weird to me at first, since in India professor-student communation isn’t quite as casual, but my RA (who was a senior) insisted that I try it, and after a couple visits I realized that most professors don’t mind students visiting at all.

Music is a big part of the University of Rochester experience, and I love that. From student recitals to a capella groups to concerts at Eastman Theater with famous guest artists like Joshua Bell and Seong-Jin Cho to seemingly random pop-up performances all around campus, there is always something musical going on.

All undergraduate students at the UofR who are proficient in an instrument at an intermediate level or higher can take private lessons with a doctoral student at the Eastman School of Music free of cost. This was great news for me, and one of the first things I did when I got to campus was sign up for an audition for piano lessons. In the spring semester I also joined the chamber ensemble program, which gives students a chance to form and perform in a mostly self-directed chamber group. The only requirements of the program are that each group must complete at least four masterclass-style coachings with an instructor from the School of Music, and perform at a final concert. Everything else–from selection of pieces to rehearsing to interpretation–is for the students to work out themselves. I was part of a piano duet along with a friend. 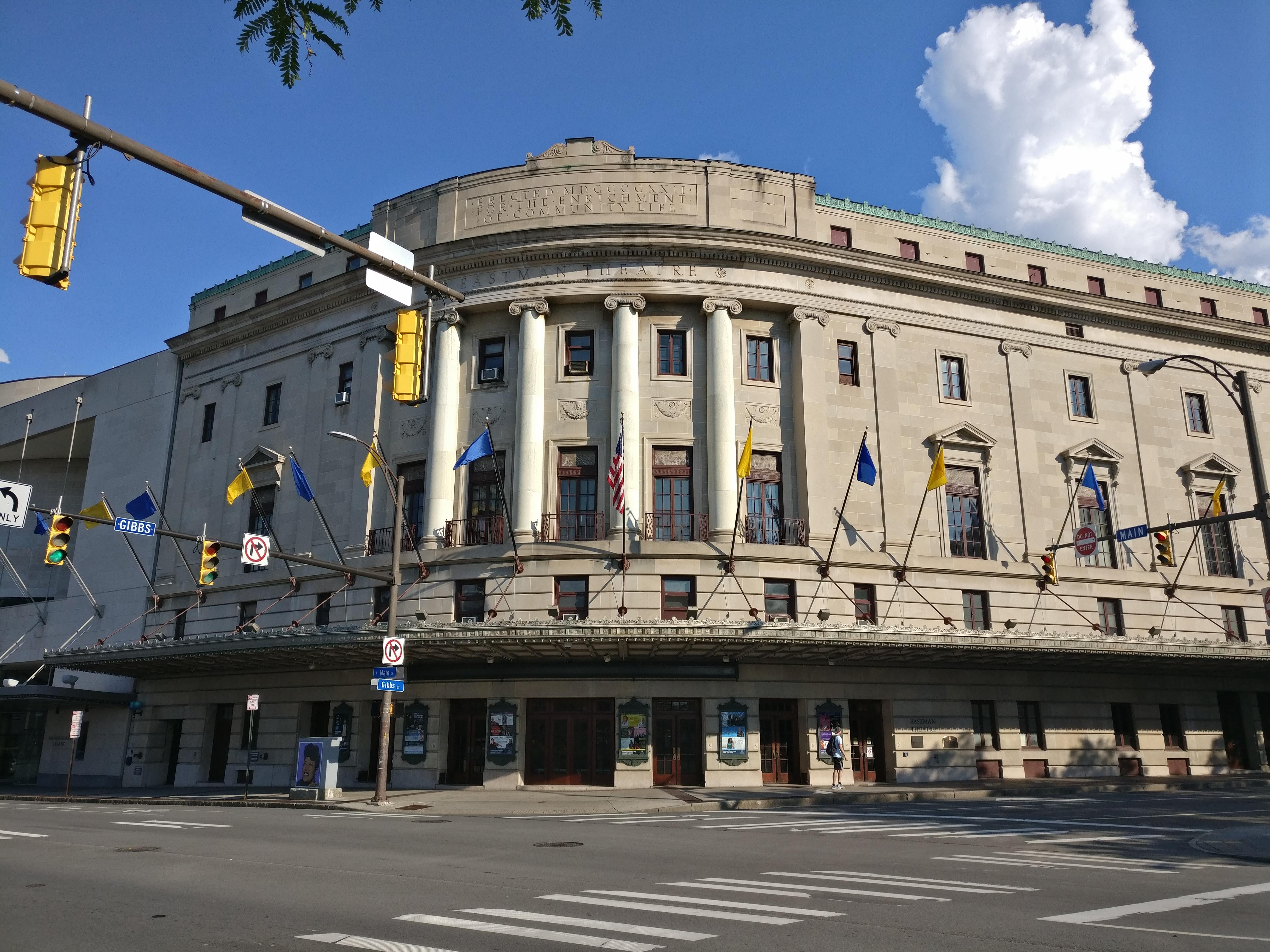 For most of the fall semester I was involved in UR Makers, a club where students get togeter and… well, make things. I took part in the Pumpkin Launch with the maker: a UofR Halloween tradition where groups compete to design and make a contraption that can launch a pumpkin as accurately as possible; points are given based on how close to a chosen target one’s contraption can shoot. We made a trebuchet, and almost won second place (we got disqualified because our launching mechanism broke and we took too long to fix it). Regardless, it was a fun experience. I also went to the Rochester Maker Faire with them, where we displayed a few things we had made over the semester. 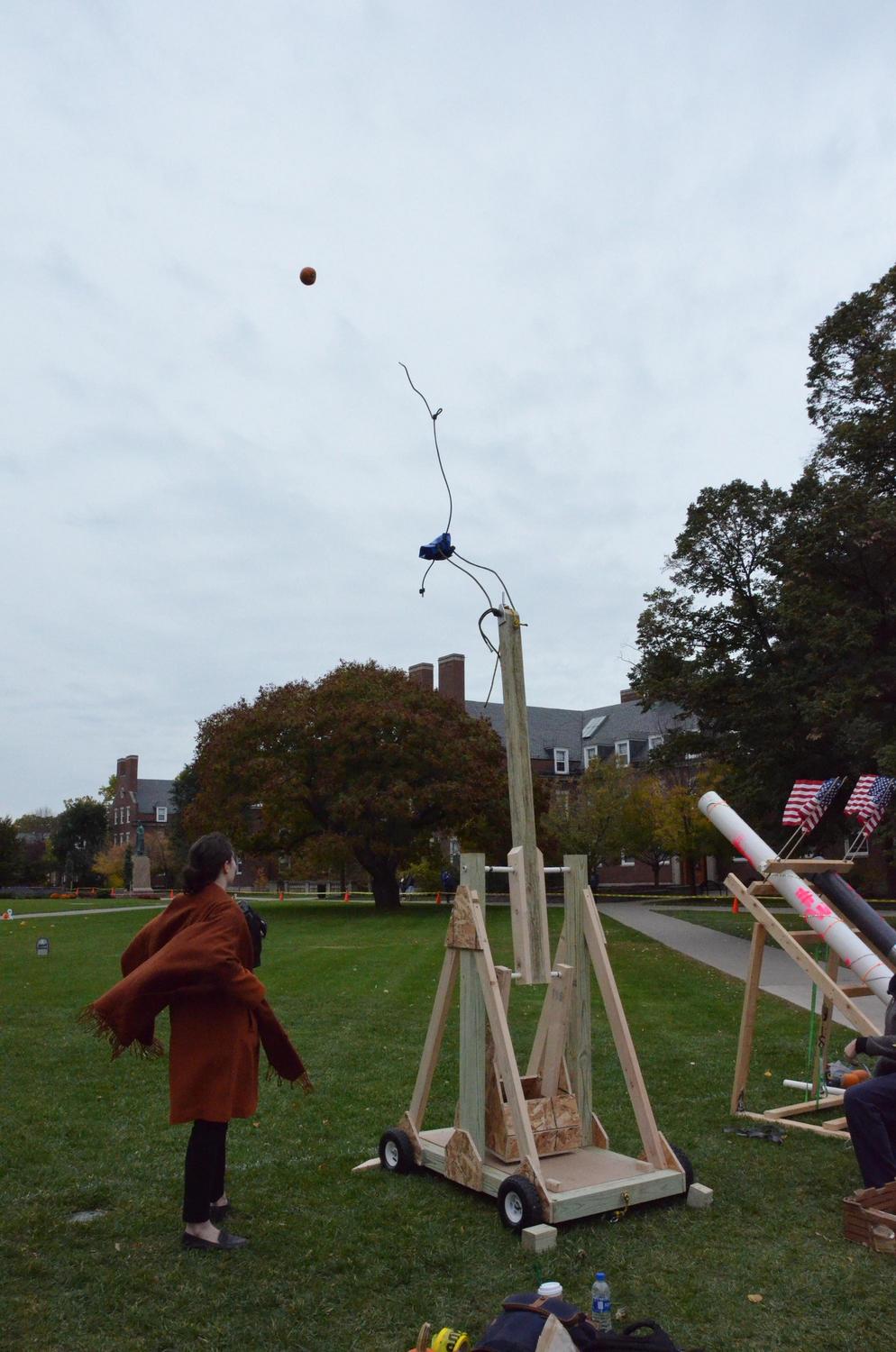 In spring, I wasn’t quite as involved with the Makers as I would have liked because of my increased course-load and other activities. I did, however, become very involed in a new club named UR Splash. UR Splash, modelled after MIT ESP, is aimed at getting high school students in the Greater Rochester Area excited about higher education by holding educational programs at the Universityi (or potentially also at schools). Towards the end of March we held our first Splash Day, where we invited students from high schools around Rochester to campus to take hour-long classes taught by UofR undergraduates. Because of how new student organizations are approved at the University, we were forced to hold the program on March 30, which was much earlier than we would have liked. Fortunately, we managed to pull off an event we were decently happy with (the short timeframe meant we couldn’t do as much outreach, and so the program was a lot smaller than intended), and which was enough to secure student club status for UR Splash. At the end of the semester, I was elected to be the vice-president for Splash for the coming year. I’m excited for the coming semesters and the programs we plan to host during them: look out for blog posts about those :)

The University of Rochester, as I learned quite quickly, has a very close-knit community. Despite having around 6000 students across all departments and schools, the school has a “small school feel”. I quite like this, although I do sometimes wonder what a being in a larger school would be like. Rochester as a city isn’t too big, but is still big enough to have almost everything you would need as a student. It is also very close to a lot of scenic destinations and national parks and, as I have learned recently, a large network of bike trails.

As a first-year I found the residential life student staff on my floor very helpful to have. Each first-year hall has a residential advisor (RA), a first-year fellow, and a D’Lion, each of which is an undergraduate student. The RA is supposed to help students with residential life procedures and such, the fellow is there for academic support, and the D’Lion is there to “incorporate school spirit in the hall” (classic UofR language… Meliora). In practice, the staff on my floor were less “ResLife people” and more “great friends who you can take advice from”. I especially became good friends with our D’Lion. As a fellow FOSS and computer science enthusiast, I spent many late nights with him (usually also with a couple other friends) chatting in the lounge for hours. He did instil in us a regard for the beautiful creature that is the groundboi (UR lingo for groundhog. We believe they are far superior to and should replace our mascot, the Yellowjacket, who we hate), which I suppose does count as “school spirit”, so that’s a job well done, I guess.

I’m not sure how one concludes a blog post such as this one. “The year was great”? “Looking forward to 3 more”? Regardless, the plane I’m in is about to start its descent into San Francisco, and I am going to be asked to stow away my laptop at any moment now. So here’s a generic picture of Rush Rhees Library on a winter’s day to end the post. Meliora! 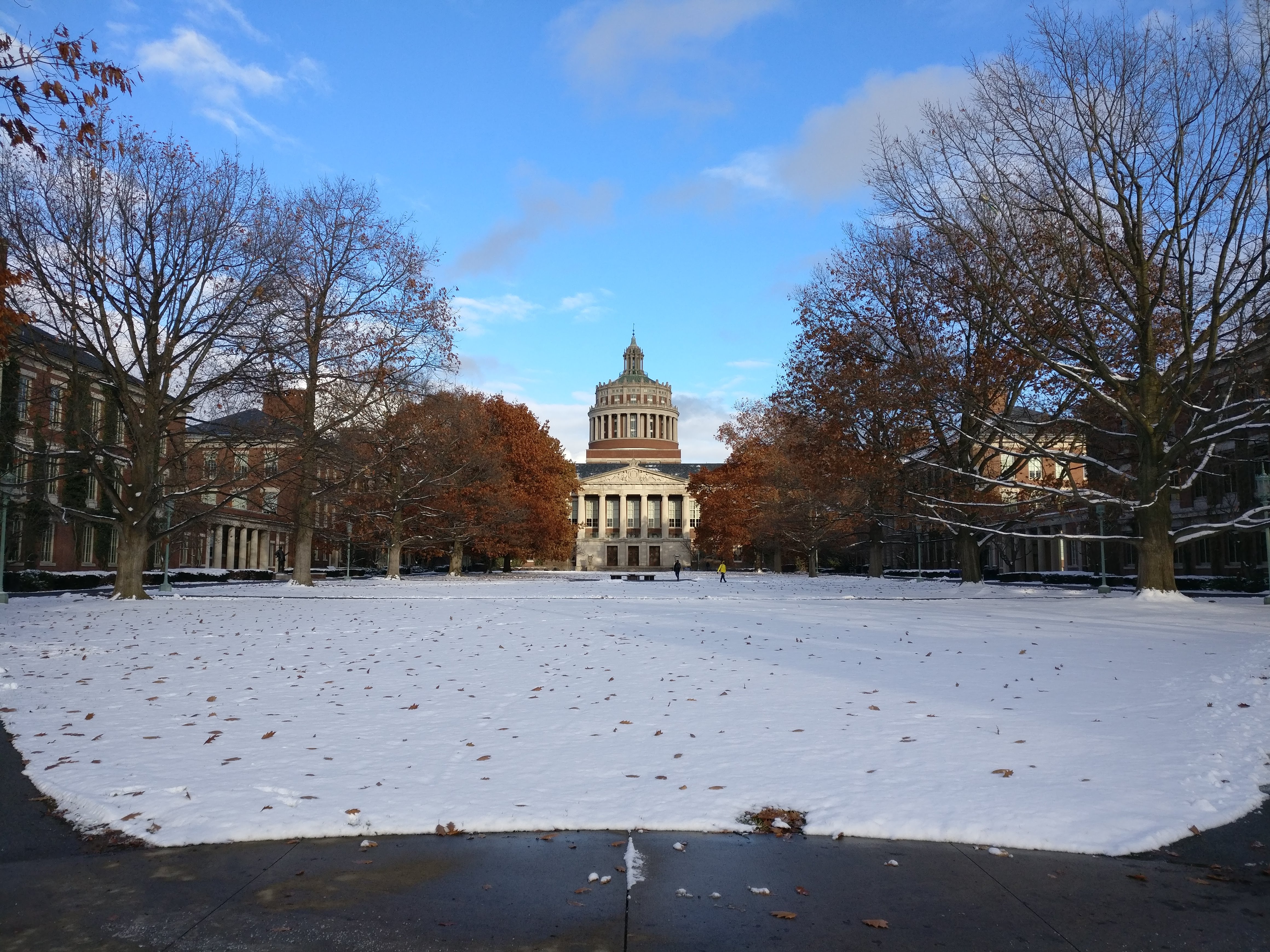